"For the Emperor... Or Perhaps the Warmaster!"

After building and painting Brother Garam, my World Eaters Contemptor last month the 30k bug has finally bit me. For some reason Dark Angels as a Legion never quite appealed enough, but I've now found my Legion Love, a Shattered Legions Love to be exact. I am on track for 3000pts of Blood and Steel, my combined force of World Eaters and Iron Warriors. My goal is to build a 3000 point Heresy list that can be broken down, roughly into two 1500 point lists that Tim and I can play against each other here at home too.


So as you see I've got a good start in building so far, but 3000pts is a big goal so this'll take some time. All the longer when I start thinking about the cost of Forge World models...
I plan on getting my shoulder pads from Shapeways, I've bought some Pop Goes the Monkey products and been super happy with them. When it comes to third party a lot just isnt good enough, Anvil Industry however has a great reputation and I was very satisfied when my Chain Axe order arrived, almost 50 of them is a good start for a World Eater army; gotta love +1S.

To help keep me motivated I've joined the Age of Darkness podcast 'Two Week Hobby Challenge', here's hoping I don't spend too long in the Box of Shame with JP.

Posted by Drake Poldragon at 16:39 No comments:

Hmm, I seem to have lost the last post...

With #Dreadtober all wrapped up I did write a final post with my 'photoshopped' image. I used Gimp to do the work, all based on lessons learnt from tutorials Joe posted up for us in the last week. 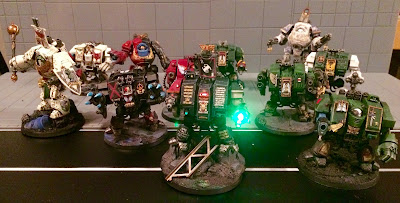 Next up, the Horus Heresy, Blood & Steel.
Posted by Drake Poldragon at 16:42 2 comments:

#Dreadtober Almost all Wrapped up


Well All Hallows Eve marks the end of October, and that's the end of #Dreadtober too, or is it?

Joe, the organiser has left us one last week, and one last (and potentially tough) exercise if we want to try it. That is to improve our photography skills. Now I've only recently begun with a white background and using light editing to get a better/cleaner image, but hopefully I'll get a chance to go over the tutorials Joe has offered up and do something impressive.

In the mean time I've been busy. I was away for a while last week helping family move house, so sorry about the lack of update, I've got models done though.

First up is The Fury, the name I came up with eventually for my Death Company Dreadnought. He's been taken by h Back Rage for so long that he doesn't know who he is any more. 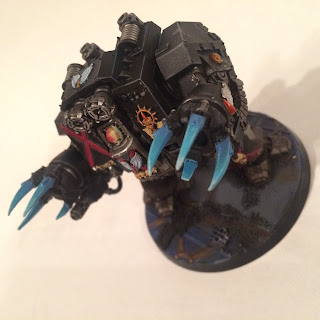 Then Garam, my bonus Dreadnought got done, like I took my first idea from another Dreadnought I'd seen on Twitter (Bruno Massa) I took Garam's base from @AwesomeClaw's work for his Tau.
I'm so pleased with Garam that I'm now planning on making a 30k force that I can use him in. More on that in future posts.

Garam of the World Eaters

Well #Dreadtober is going great, some of the models we've seen have been fantastic, and a lot of folks are getting finished now. Me included. :)

Brother Durant of the Angels Sanguine joined Turian as completed.

Then my still unnamed Death Company Dread got all fully base coated and I realised that their was plenty of month left. So whilst he is almost finished (I've done his base too) I started on one more.

Brother Garam of the World Eaters Legion was a fairly easy build. I've gone for heavy weathering as I see him as part of a Shattered Legion force with little support. Maybe oneday I'll get a 30k force done.

One Down Three to Go - #Dreadtober Progress Week 3

It's been another good week in #Dreadtoberville. I finished my first Dreadnought; Codicer Tuvian of the Angels Sanguine. 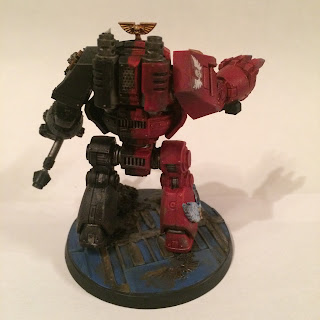 And I've also done a bit more on Brother Thanatos. After a bit of to and froing on his banner I've decided to paint one, but not attach it yet. I'm unsure if the model is too busy with it on top, if you have an opinion please comment.

First up the Angels Sanguine. I started getting some base colours on my dreads during the times I couldn't build. I quickly realised I'd made an undercoating error and red'ed up half of my Death Company dreadnought along with the other two. I spent a moment debating rolling with it, but both the fluff and general opinion said go all black. I did however decided to go with a red 'blood smear' image across his 'face' just to make him a little different, I'm thinking of going with this throughout my Death Company models, we'll see. 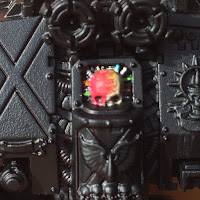 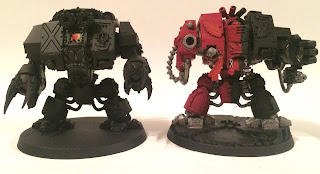 The other two were easier to continue on, my Furioso got his red's and blacks blocked out fully and Leadbelcher on the metal sections, it's a start. Over a few evenings, in between building Brother Thanatos, I've managed to almost finish Codicer Tuvial, my Librarian Dreadnought. It's been great fun picking out the details and making a character of him whilst retaining the quite simple and clean style of the B@C Contemptor. All that remains now is basing, which will be for all three later in the month, and weathering. I may go heavier on the weathering on my Angels Sanguine than my Dark Angels who are mostly only dirty, we'll see that'll be a new trick to learn.

Finally I've built my Deathwatch Dreadnought, Ancient Thanatos of the Red Hunters.
I've struggled a little with his left shoulder, I want to have the iconic Deathwatch text, but none of my attempts have been good enough... yet! My greenstuff version was OK, but not clear enough to make out as text, the silver paint pen I tried wasn't fine enough to be worth it, next up I'm going to have to try painting it on. Otherwise it's all good, the base covers up the wiring problem I created just fine and all of the other little conversions I've made I'm very happy with. The Deathwatch style shoulder auspex is made from the light in the Ven. Dread. set with a small piece of Chaos fencing added on the top and some lenses placed on rather than the lights you normally get (they are greenstuffed away on the back side). I cleaned up a sarcofogus front to add the Deathwatch I on and trimmed down the backpack top for his left shoulder.

The silver text is first glossed to make the Lamian Medium & Stormhost Silver mix flow in nicely and the the panel above is touched up with black to get it sharper. I'm quite pleased with how it turned out.

All in all a good week, tomorrow I begin work again so we'll see how much more I can get done. At the least I hope to complete Tuvial and Thanatos. #Dreadtober is turning out to be so much fun. That is in a large, large part to all of the activitey going on around the net, Twitter is fantastic, and the hashtag keeps popping up on various Facebook groups too, all thanks to Joe at the Broken Paintbrush, please check out the latest showcase post where many participants explain how their week has gone much more briefly than I just have.
Posted by Drake Poldragon at 10:48 2 comments: 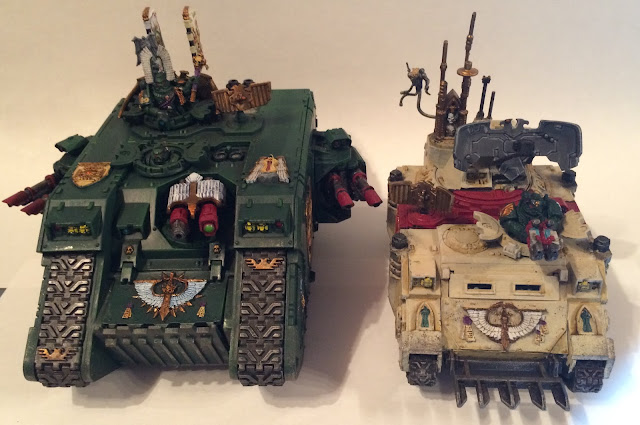 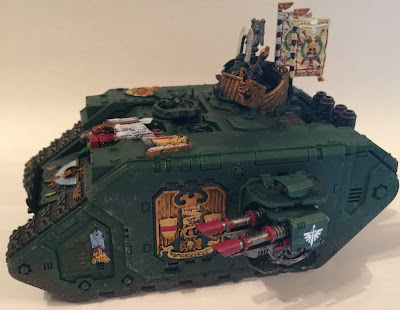 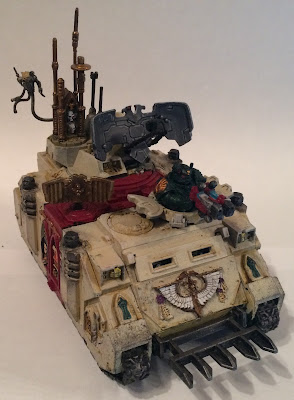 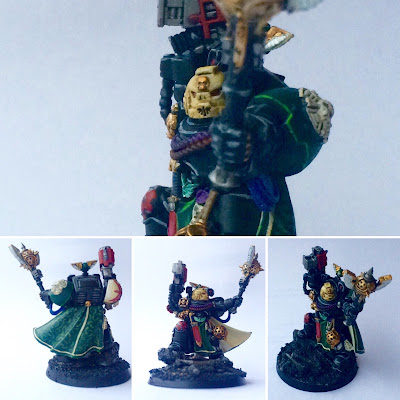 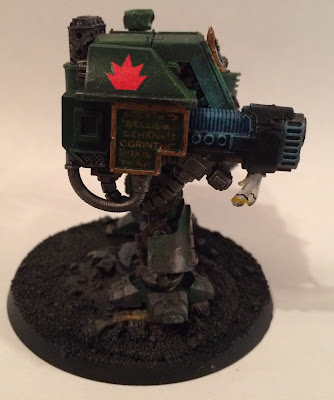 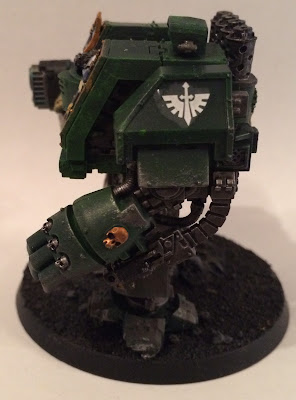 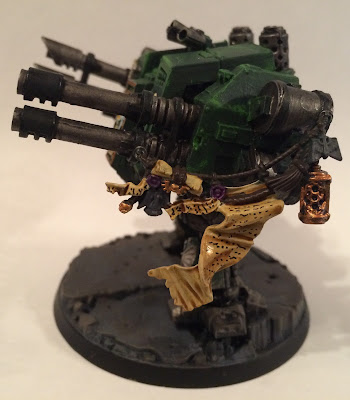 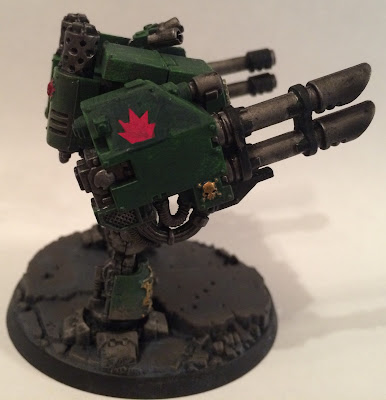